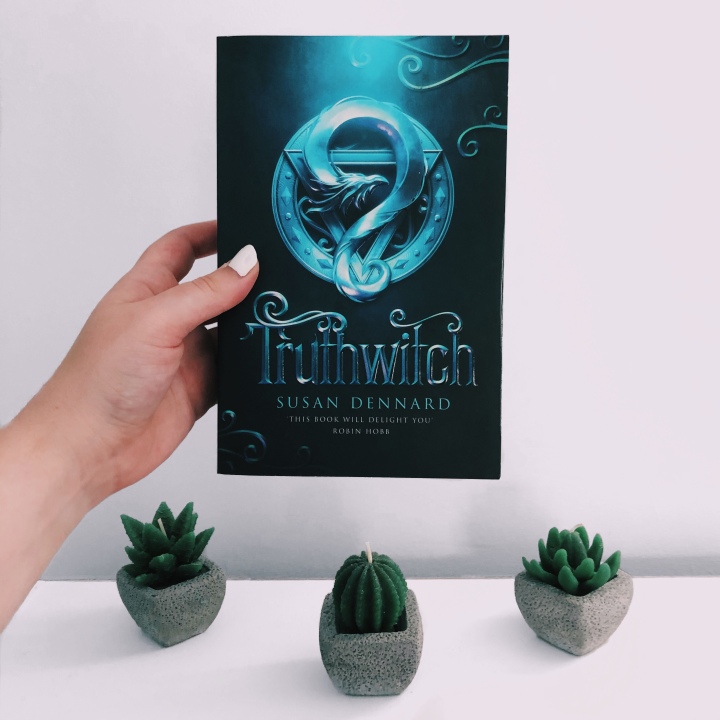 Truthwitch is the first novel in Susan Dennard’s fantasy series, The Witchlands, which follows best friends Safiya and Iseult. Safiya is a Truthwitch, meaning she can determine what’s true and what’s false. This is an extremely powerful magic that people are willing to kill for in order to be able to use it to their advantage – particularly the nobility as Safiya could be used as a political pawn. Iseult is a Threadwitch, and this means that she can physically see the bonds between people, but people fear her and where she comes from. Dilemmas arise for both characters which force them to flee separately, and the story follows these characters throughout their journey of stumbling into more trouble.

This book had a fantastic setting that was described ever so vividly. The ship and all of the places the characters went were atmospherically explained to the point that I could see the world in my mind as clearly as I would if I were watching a film. Dennard successfully crafted a world which was full of political intrigue, magic, friendship, trust and betrayal. I personally love when fantasy books contain political content as it makes the world seem much more real and intricate, so that mixed with a unique magic system made this a delightful read.

Truthwitch is also a fast paced novel, and that I highly appreciated as there was never a boring moment. Action kick-starts straight away with the story line of the Bloodwitch, called Aeduan, who wants to capture Safiya for himself and will stop at nothing to do so. This story line was carefully interwoven with the others that the author introduced throughout the book, and it’s clear that she spent a lot of time and research on them.

Merik is a character who I love just as much as Safiya and Iseult. He is a Windwitch, meaning he can manipulate wind. He is also Prince of Nubrevna, Captain of the ship, and extremely caring towards his people. Despite conflict within his family, he is willing to do anything to ensure that Nubrevna will have enough food and beautiful lands once again. I adored the romance that is beginning to blossom between him and Safiya. They are both so sarcastic and witty, and I can’t wait to see how their interactions continue in the second instalment of the series. Whilst romance in this story is very evident, it was nice that friendship was still the main focus, what with the ‘threadbrother’ and ‘threadsister’ aspect.

I was also impressed with the writing. Dennard’s style is quite dense and therefore a lot of detail was included during description, however I did not think that it was too much. Her writing naturally flows and you can also notice the difference in narration when the points of view change which I think is very important; the writing definitely enhances how real the characters feel. The politics and geography of fantasy worlds can sometimes be intimidating and difficult to understand and as they’re not something we as the readers are used to, however somehow Dennard made these things very simple to get to grips with in this novel which I appreciated.

I experienced my first ever reading slump prior and during the time I was reading this book which was annoying; the internal conflict of me wanting to read on and not being bothered to read on was extremely exhausting, however it did allow me to experience the story for a little while longer. This is one of those books which I can’t actually pinpoint a single fault, however if it was 100% perfect it would have taken me out of my slump, so for that reason I couldn’t quite give it a full star rating. I still highly recommend, giving it a 4.5 stars.