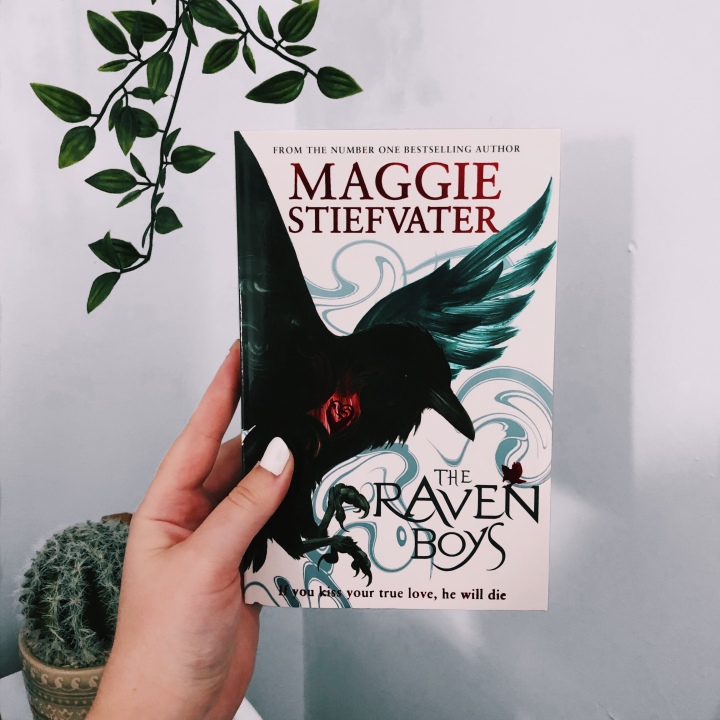 “A host of co-dependent teens with a battery of psychological issues comb rural Virginia for a dead Welsh king with dubious magical powers. Trees talk; hitmen put down roots; dead people live; living people die. Cars are described in loving detail. Fuckweasel. A house full of psychics tells everybody the future and drinks a lot on-page considering it’s a young adult series. Nobody kisses anybody, which is weird because everybody loves everybody. There’s rich boys! Poor boys! Sad boys! Angry boys! Raven boys! Collect them all!”

The Raven Cycle by Maggie Stiefvater was one of the first series I heard about back when I first discovered booktube in early 2016. It was raved about so hard but I couldn’t understand why. Firstly, many reviews that I watched/read spoke about how magical, lyrical and strange the writing was, to the point that it was quite difficult to read. This put me off massively as these words which I saw so often in the reviews reminded me of “flowery” writing which I really dislike.

But since reading the novel myself I understand why people used those words for description because Maggie’s writing truly is unique and beautiful to read. I personally found the book really easy to read as her writing has an elegant flow, so I can assure anyone else who is also not a fan of “flowery” writing that this isn’t strictly it. It’s beautiful, yes, but not around the bush nor complicated.

Secondly, many also commented on how this is a character driven series, which yes, it is, but it also doesn’t lack a plot like what people insinuate when they say it’s massively character driven. I am definitely more of a plot based reader than a character based one (though a mix is of course the best way to go), and I personally found the plot line of this novel to be extremely intriguing as it’s kind of like a historical inspired magical mystery in which for every question answered a new one arises. This allowed the story to keep moving at a good pace which I highly appreciated. The plot was masterfully developed throughout, and the way that Maggie connected everything together was impressive.

So obviously my previous negative thoughts were developed due to the fact that I held onto a lot of opinions that I was too scared to challenge and see for myself. I therefore felt the need to explain these misconceptions and then why I found them to be false in my view just in case any of you who are reading this blog post are also sceptical about picking up this book. You may be thinking why on earth I decided to pick up a book which included (or so I thought) many themes I personally do not like to read, and the reason was because so many reviewers who I notice have similar tastes to me regarding books completely adored this series, and I consequently still remained intrigued as to why that was the case. Despite the annoying fact that these misconceptions prevented me from starting this series sooner, I also think that they enhanced my reading experience as it was so lovely to keep being continually pleasantly surprised. It was more enjoyable to find delight in something that I previously thought I wasn’t going to get on with simply because I expected a writing style I disliked and a lack of plot.

I was also a little worried about differentiating the characters; going into this novel I knew there was a group of male friends and I was a little concerned about whether I’d be able to remember who is who as that is something I sometimes struggle with in stories based around school groups. However it turned out I did not need to be worried as Maggie’s writing wonderfully explained (not in an info dump, however) the characteristics and personalities of each of the boys and there was absolutely no way I could possibly get confused. All of the characters, also extending from the raven boys to Blue and the psychics, seemed so real. They are all amazing and captivating in their own way, however they are also all realistically flawed. I connected with them all so quickly.

Whilst talking about the characters, I’d just like to place a trigger warning for abuse in this story. It is a topic which is brought up a few times and actually happens on page at a point too, so if that is something you’re sensitive to then please be careful if you still decide to give this story a try.

This was my first experience with magical realism and it makes me so excited to explore other books from this genre. The Raven Boys was incredibly whimsical and mysterious, and there was so much friendship and love. It made my heart hurt; i’m just so in love with this book! I give this book a 5/5 stars and I highly recommend.

5 thoughts on “THE RAVEN BOYS REVIEW”